Who will win the GOP nomination for President of the United States of America?

We Launched Our Website! Thank You for Your Continued Support!


In a world where Hank Williams Jr. is panned for making an analogy, the equally inflammatory commentary by those on the left, should be treated with the same prejudice.  That is, if public figures make asinine statements, they should be denounced at minimum.  My main issue is of course with Bryant Gumbel.  I get the radio announcer.  However, said radio announcer needs to get his priorities straight.
Posted by National Sponsor at 7:47 AM No comments:

Email ThisBlogThis!Share to TwitterShare to FacebookShare to Pinterest
Labels: Racism in America

Ayn Rand: Breaking down the Two Ideologies of Capitalism & Socialism

This video is a little dry, so only watch if you are a hardcore conservative.  Ideas are welcome.  Otherwise the next post down is a fascinating infographic on corporate taxes.

Posted by National Sponsor at 6:19 AM No comments:

Corporations Do Not Pay Their Fair Share: An In-Depth Exploration of The Idea 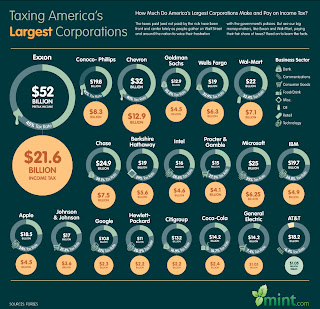 Corporations pay a ton of taxes though they probably should not. Since they are over taxed, these taxes are just passed to the consumer in higher costs. Think about this. A person who works for themselves files a Schedule C tax form and they are taxed on their earning as a company and as a person. It is one form, one tax, one person/entity.
Now think about a corporation. They are taxed on wages, and income(revenue - expenses) they bring in, THEN if they disburse to the shareholders(the would be Schedule C owner) a portion of those profits in dividends are again taxed.
This is for all practical purpose triple taxing of corporations. Talking about not paying their fair share? If you want to be intellectually honest with yourself and others, you have to admit that Democrats lie to people like you. There should be massive tax reform on corporations with the threat of reinstating the current tax standard with a slight increase if companies do not pass a majority of those tax cuts to the consumers and to a lesser extent employees. This would lower the costs of US goods at home and across the world, increase sales dramatically, create jobs, increase the wealth of emplyees, etc. This is what needs to be done and it needs to be done now.
I want to veer of subject for a second here.  The point of investing is to make a return via these dividends that exceed the rate of interest you could achieve via other financial instruments.  Since dividends are basically worthless, the morkets have degenerated to a game of speculation almost exclusively.  This is not the way the markets should operate and obviously increase risk to investors.  Many of the GOP field have put forth capital gains reuction plans that will help in some regard.  Gingrich has a 0% capital gains tax across the board and Romney has a 0% capital gains tax for households making under $200,000.  I think both plans have their merits.
However, the main point of this blog is to state the importnats of corporate tax reform, of which the USA has the 2nd highest rate of 35%.  Gingrich want a 12.5% rate to encourge new money to come into this country to take advantage of what would be a corparate tax rate that is tied for the lowest in the world with Ireland.
Oh, and by the way, the reason, some companies do not pay taxes in certain years, is because they did not make a profit or they are carrying a tax credit from years past where-in they lost a great deal of money.  Here is a generic example:
GE makes 10 billion in profits in 2008 and are taxed $2 billion.  In 2009 they have a $10 billion loss.  While they do not get money from the government, they an carry that loss forward to protect future profits from being taxed.
You have to understand if teh government only takes and does not compensate their for losses, then over time the likelyhood of all companies going bankrupt approach 100%.  That entails in loss of jobs, which result in the loss of wealth of Americans.
The time to stop the corporate bashing is now.
Posted by National Sponsor at 5:28 PM No comments:

Is this simple pandering to the smoker vote? What exactly is going on here and why does Hermain Cain give us the bed room eyes at the end of the video?
Is this the worse persidential add of all time or the best?  It certainly has people talking.